Research in the Hovel lab

Research in SDSU’s Marine Conservation Ecology lab focuses on the interaction of invertebrate and vertebrate animals and their benthic habitats. Our projects take place in seagrass beds, nearshore rocky reefs, estuarine environments, kelp forests, and coral reefs. We have a dual focus of exploring ecological concepts and addressing real-world problems that affect species and habitats in coastal ecosystems. We use a combination of field experiments, lab experiments, and mathematical modeling to address our ecological questions.

Our research is funded by the National Science Foundation (NSF), California Sea Grant, the California Ocean Science Trust, the National Marine Fisheries Service (NMFS), and local organizations like the Unified Port of San Diego. Students in the lab have received funding from a variety of national, state, and local institutions, including NSF, NMFS, Sea Grant, and internal SDSU grant programs. A juvenile giant kelpfish, an example of a mesopredator in eelgrass habitat. 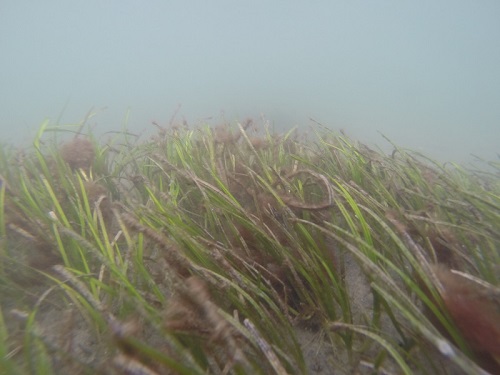 An abrupt edge between eelgrass and unvegetated sediment In a recent study, artificial eelgrass patches like the one shown here were used to investigate how habitat fragmentation influenced the abundance and diversity of epifaunal organisms. Seagrass habitats are some of the most valuable habitats in the oceans.  This is true both ecologically and economically. Eelgrass, one of about 50 species of seagrasses, is one of the most widespread of all marine macrophytes, occuring on all continents except Antarctica. Eelgrass provides a variety of ecosystem services, including providing habitat to fishery species, sequestering carbon, buffering shorelines from erosion, and reducing aquatic contaminant loads.

The world’s seagrass ecosystems are declining, with nearly 30% of global seagrass habitat being lost over the last several decades. This makes understanding the ecology of these systems all the more important.

Investigations in eelgrass ecology make up one of the major research themes in our lab. We ask three fundamental questions regarding eelgrass habitat:

I am particularly interested in the effects of habitat structure on mesopredators. Mesopredators are (often) juvenile fishes or invertebrates that inhabit eelgrass for refuge from larger predators. But these vulnerable juveniles also are hunters of smaller prey.  Thus, they constantly face decisions about how to best avoid being detected by larger organisms and how to efficiently forage on smaller organisms. Habitat structure may strongly influence both of these functions.  The density and biomass of eelgrass shoots within patches (often referred to as structural complexity) influences how easily mesopredators are detected, how well they move, and how easily they can detect prey. Eelgrass habitat is often patchy, and proximity to patch edges may influence how often mesopredators encounter larger predators that tend to patrol these edges. Finally, at seascape scales, patchiness and connectivity of the seascape influences their ability to move throughout an area, how they select patches for foraging and refuge, and their vulnerability as they do so.

Many of my graduate and undergraduate students have explored these issues for local San Diego mesopredators such as the juvenile giant kelpfish.  Recent projects have addressed issues like:

Another focus of our lab’s seagrass research is on how habitat structure influences the abundance and diversity of epifaunal organisms (the organisms that live among and on eelgrass blades). We address the influence of structural complexity on community structure, as well as the influence of features at the seascape scale, such as patch connectivity, habitat fragmentation, and proximity to edges. And many of our projects focus on how structure at these two scales interact to structure communities, a concept that is greatly understudied in the sea as well as in terrestrial habitats.

A recent focus for our lab has been the investigation of links between habitat structure, faunal community structure, and important ecosystem functions. Ecosystem functions include the influence of herbivory on eelgrass growth, the production of epifaunal consumers (important links in seagrass food webs), the storage of carbon, and the cycling of nutrients.

In 2011, our lab joined the Zostera Experimental Network, led by Dr. Emmett Duffy of the Smithsonian Institution in Washington, D.C. This network is a collaboration of scientists from across the northern hemisphere that study linkages between eelgrass habitat, biodiversity, and ecosystem function. The first major focus of ZEN was to investigate the relative effects of top-down (herbivory) and bottom-up (nutrients) effects on eelgrass growth and persistence. Specifically, we tested the hypothesis that epifaunal consumers in eelgrass habitat help maintain productive eelgrass beds by grazing on competing epiphytic algae. A major result from this study was that globally, sites with high biodiversity of epifaunal consumers had the largest top-down effects on epiphytic algae. This result confirmed the importance of biodiversity, which had been shown to have many positive effects on important ecosystem functions in a variety of laboratory experiments and singular field experiments.

ZEN now has expanded to focus on several linkages between epifauna, eelgrass structure, and ecosystem function. A recently funded proposal authored by Dr. Emmett Duffy, Dr. Jay Stachowicz, and myself has funded the last three years of investigation into these issues. Some recent experiments have examined: A female spiny lobster holding fertilized eggs on her abdomen. Lobsters may release over 100,000 larvae at a time.

The California spiny lobster supports a regionally important fishery in California and Baja California, Mexico. Spiny lobsters are captured commercially in traps, and recreationally by hoop net or by hand while free diving or SCUBA diving. Lobsters also play key roles in kelp forest ecosystems: as an upper-level consumer, lobsters may help control populations of sea urchins, the dominant herbivore in kelp forests.  Sea urchins undergo periodic and localized population booms and may form “urchin barrens” which are areas completely devoid of kelp and other algae. Because these algae support diverse communities of invertebrates and fishes, uncovering the processes that dictate the degree of control that lobsters and other predators have on urchins is important, and had been one focal point of our research.

Lobster behavior also has been a focus of our research.  In a set of experiments spanning three years, we tracked dozens of spiny lobsters using acoustic tags and hydrophones. Acoustic “pingers” were attached to lobsters, and these animals were tracked for periods of weeks to months. This helped us identify home ranges, habitats used by lobsters as they forage at night, and the distances moved (and movement patterns used) by lobsters as they hunt for prey.

During the daytime, lobsters inhabit shelters made from rocky crevices, stacked boulders, cobble, and hollowed out kelp holdfasts. They can be found singly in shelters, or in groups of up to several dozen lobsters.  Some of our recent experiments have focused on the factors that may dictate how lobsters select shelters, and the benefits that they may get from inhabiting particular shelters. For instance, a recent master’s project by Amalia Harrington revealed that juvenile California spiny lobsters select shelters occupied by larger conspecifics, and that this reduces their chances of being consumed by predators.

One of our most recent projects involved quantifying spiny lobster abundance, behavior, and habitat use in a set of southern California marine protected areas (MPAs). California’s Marine Life Protection Act mandated the creation of a network of MPAs throughout state coastal waters.  We worked with commercial fishermen and state resource managers to tag and recapture lobsters, in order to quantify population size and movements into and out of MPAs. The results of this work were submitted to the California Ocean Science Trust, the organization that is spearheading MPA baseline monitoring in intertidal and subtidal habitats throughout California.

Our latest and ongoing spiny lobster project is part of the National Science Foundation’s Coastal SEES (Science, Engineering, and Education for Sustainability) program. Working with researchers from SDSU (Dr. Arielle Levine, geography), Scripps Institution of Oceanography (Dr. Art Miller) and the National Marine Fisheries Service (Dr. Sam McClatchie of NOAA’s Southwest Fisheries Science Center), we are producing forecasts for our spiny lobster population and fishery under different climate change scenarios. This involves modeling lobster larval dispersal as well as modeling the abundance, distribution and “catchability” of lobsters given the shifts in currents and water temperatures that are expected along our coastline. Along with this we are assessing how the fishing community and regional economy may respond to changes in our climate and lobster population.

A purple sea urchin tethered to a heavy chain on a rocky reef. Tethering is one experimental technique commonly used to assess the relative risk of predation for species like sea urchins.

Rocky reefs constitute a widespread subtidal habitat in the oceans. In Southern California, these reefs support some of the northern hemisphere’s largest kelp forest habitat. Our work on these reefs has been spearheaded primarily by Robert Dunn (current PhD student) and Dr. Ryan Jenkinson (former PhD student) who have assessed the strength and importance of predator-prey interactions, particularly involving sea urchins, spiny lobsters, and large fishes such as sheephead. There is widespread interest in the field of marine ecology for assessing the strength of top-down (predatory) processes within food webs. Herbivores like sea urchins play a key role in these food webs by helping to control the abundance and persistence of habitat-forming kelp. It therefore is important to determine whether predators, via their behavior and abundance, can control sea urchin populations. Anecdotal and correlative evidence points to the importance of predation on sea urchins in maintaining kelp forests; yet, few direct experiments measuring interaction strength between urchins and their predators have been performed in the Southern California region. We continue to perform field and laboratory experiments assessing whether predators can control urchins, under what conditions this may be possible, and what factors most strongly affect these interactions.

Former graduate student Julia Coates conducted several experiments with pink abalone on rocky reefs in San Diego. Julia tested how far abalone move within reefs, and whether they form spawning aggregations that enhance reproductive success. Her work had strong implications for strategies that may lead to recovery of these severely depleted populations.